Fancy another Eurovision vote for this week ?

Imagine your bank is at the forefront of energy financing. Its clients are the majors of this world : BP, Exxon, Royal Dutch Shell, Total and also Husky Energy, Chevron and ENI Spa.

Which of those 7 giants deserves your 12-points vote for its rock-bottom-low 15% LossGiven Default (in every economic scenario) on all the following 3 credit exposures :

Here are a few – misleading 🙂 – pieces of information to help you give your 12-points :

Ok…you are probably – and naturally – thinking EXXON, with its highest credit rating and lowest Net Debt to EV ratio. Well, in bad macro-economic scenario, EXXON 10-year senior unsecured bond will cost its capital providers a heavy LGD : as you can see on the here-under candlestick chart, 50% of EXXON 10-year unsecured LGD distribution stands between 15% and 31%. 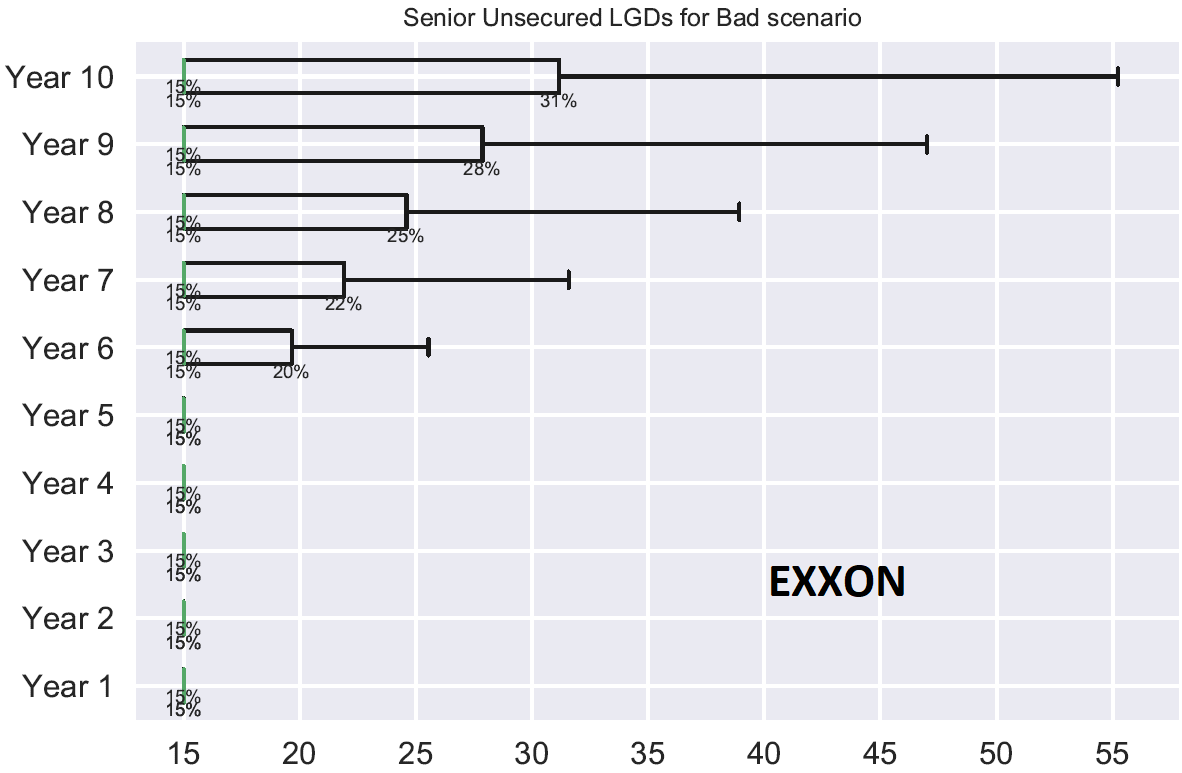 Let’s stick to credit rating – for what it is worth – and examine Chevron. Chevron unsecured LGD in a bad economic scenario, is unsurprisingly worse than EXXON : 50% of Chevron 10-year unsecured LGD distribution stands between 15% and 40% with a median at 29%. 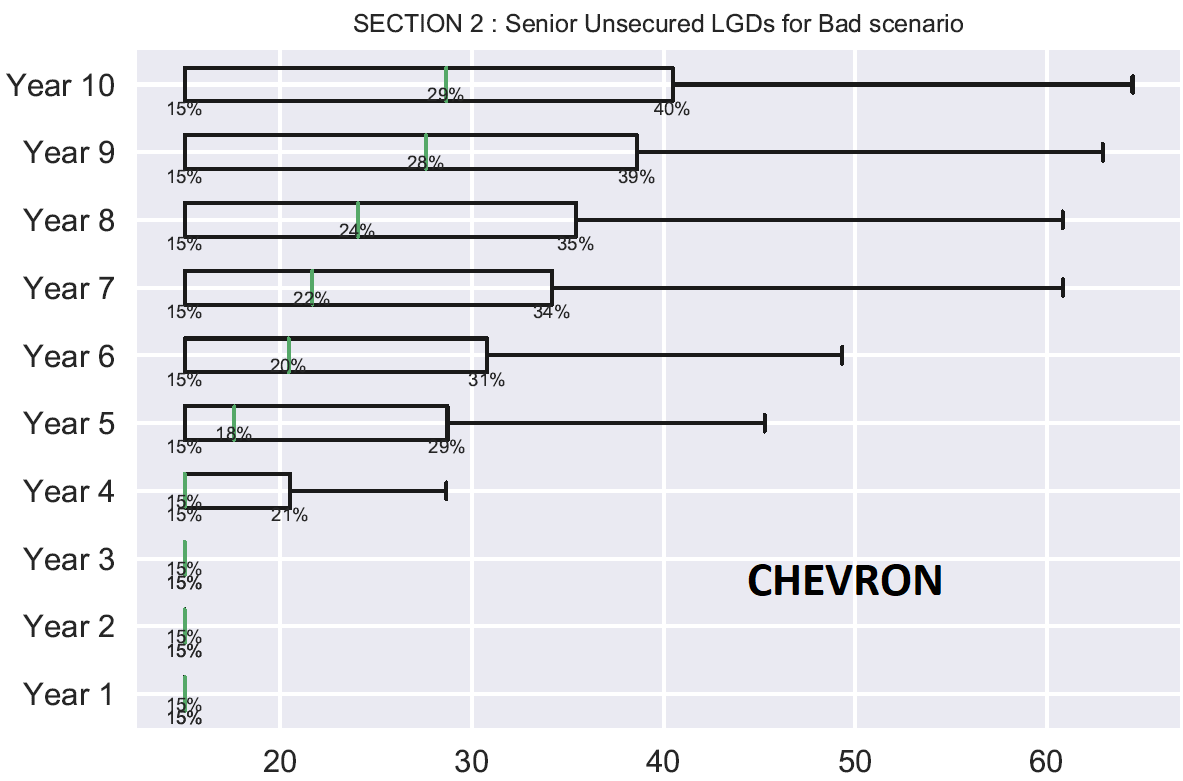 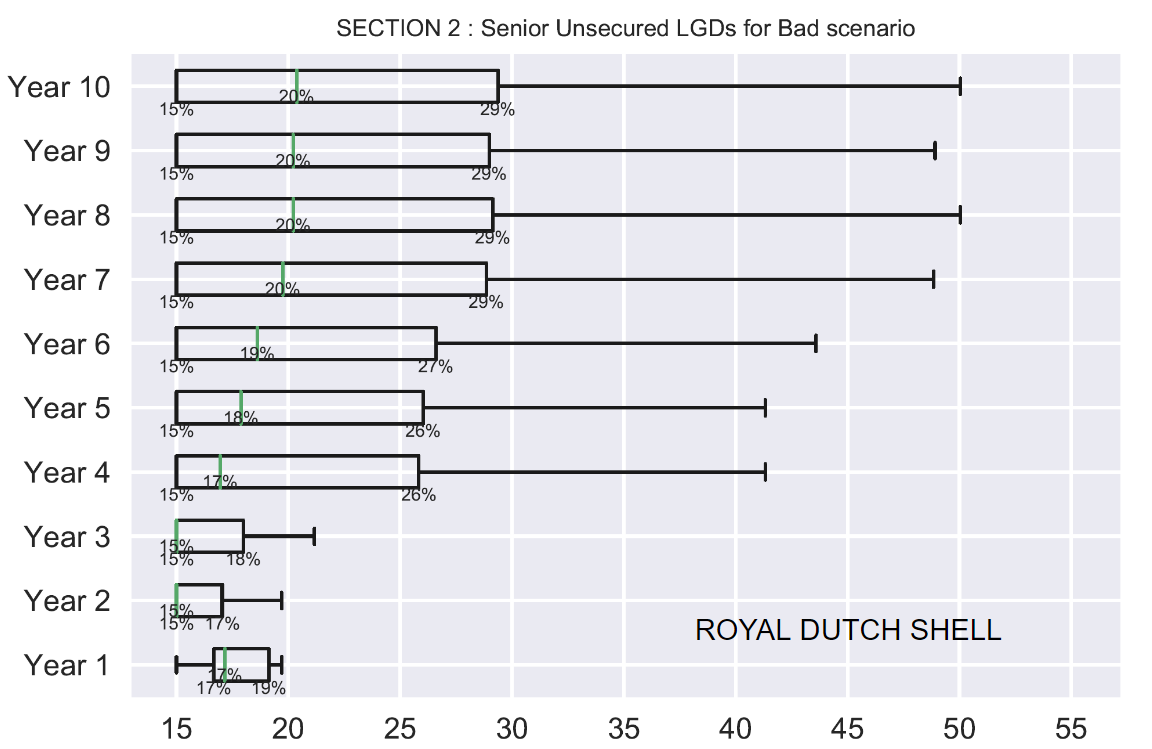 Surprisingly – or not – things are getting worse both for TOTAL as well as for BP. Indeed, 50% of TOTAL 10-year unsecured LGD distribution stands between 29% and 43% with a median at 36% in bad macro-economic scenario. 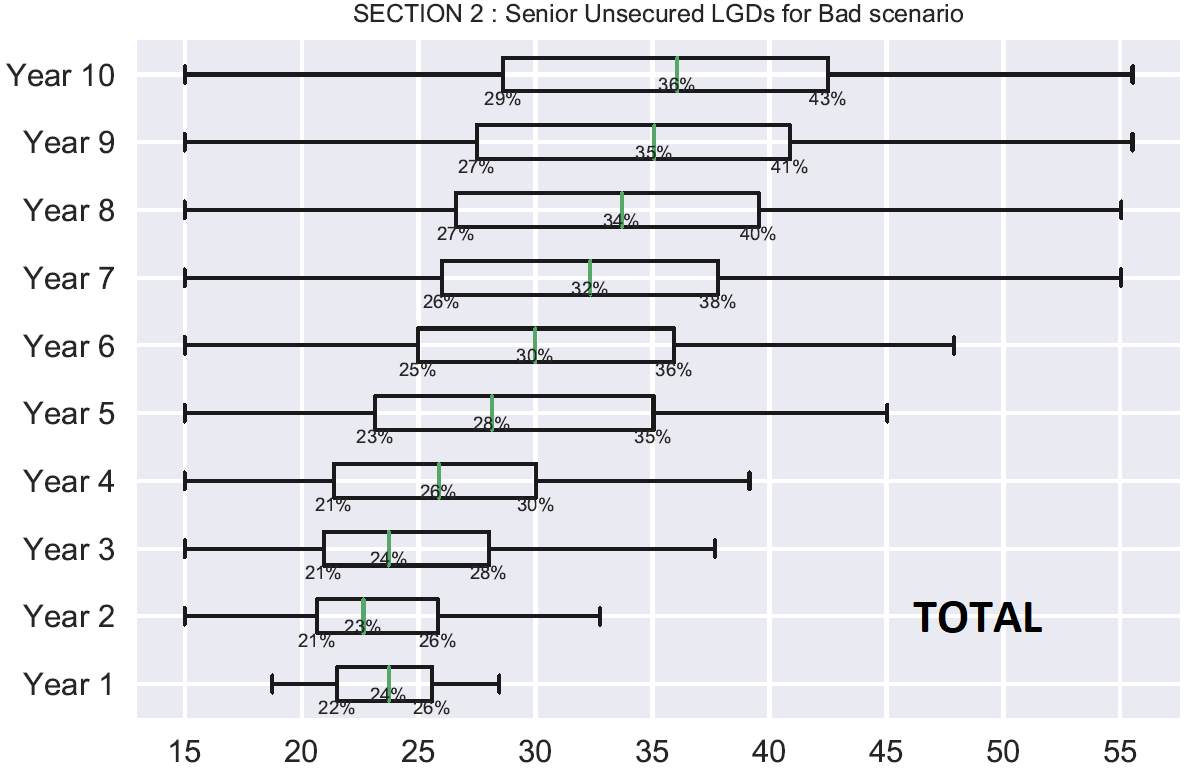 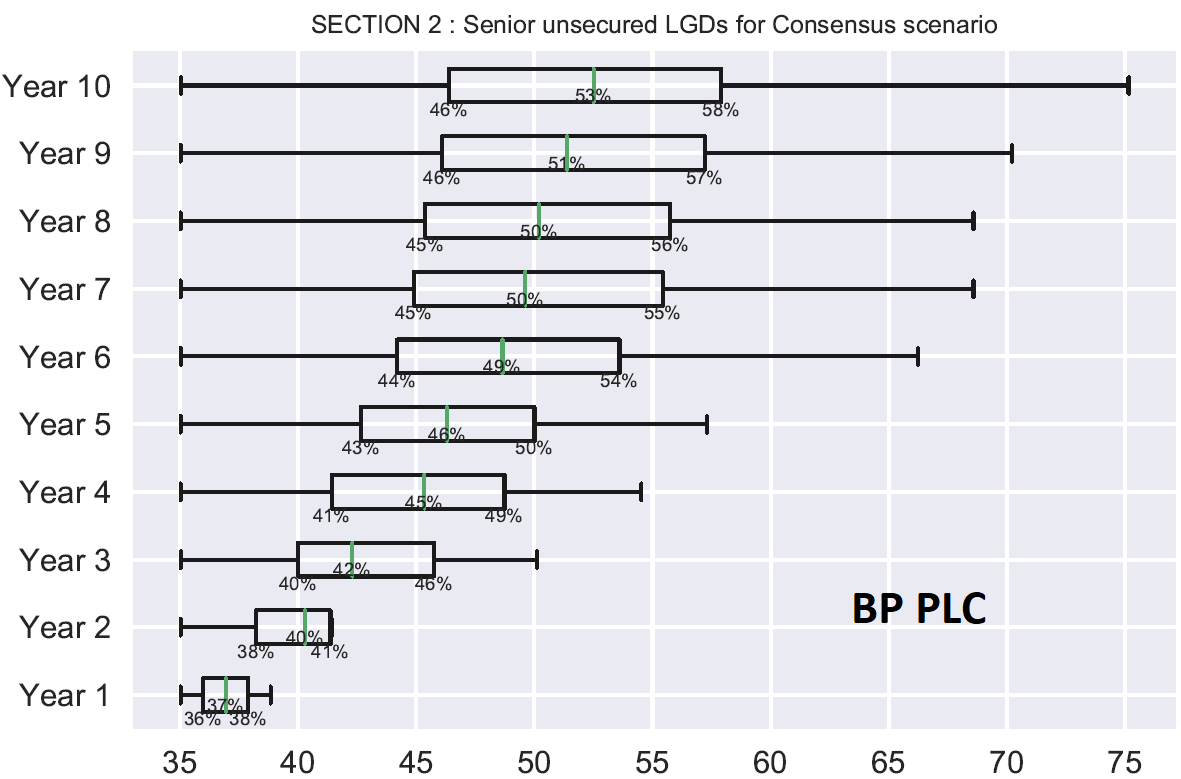 As a side note, and admittedly, all those LGDs are still far lower than standard CDS-market 60% LGD. Already offering an unfair competitive advantage for anyone pricing a credit exposure.

As another side note, the next box-chart will probably raise a few eyebrows if BP was to ask for a subordinated unsecured credit line. Indeed in almost all cases, BP subordinated LGD stands at a solid 100%. Now, that is even higher that the standard CDS-market 75% LGD for subordinated credit exposure. Except in very good macro-economic scenarios (the green bars). 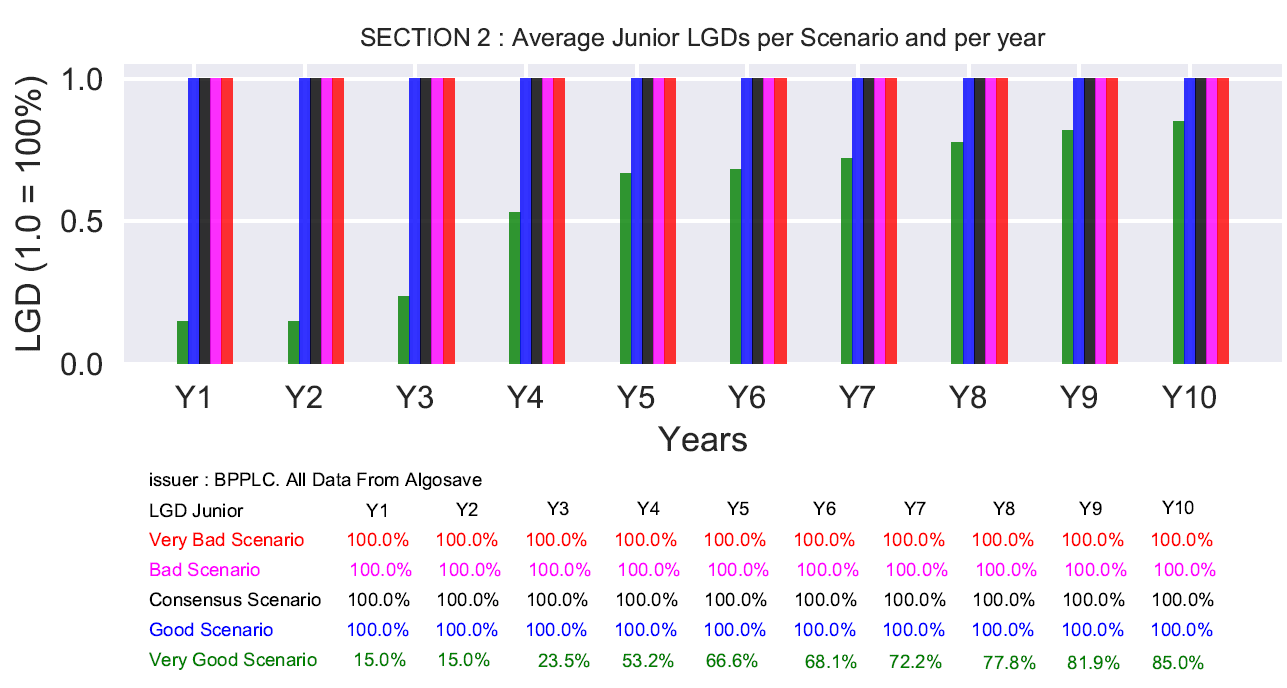 Interestingly – and despite its lower credit rating – ENI’s LGDs are relatively low : they resemble those of EXXON in all macro economic scenarios. 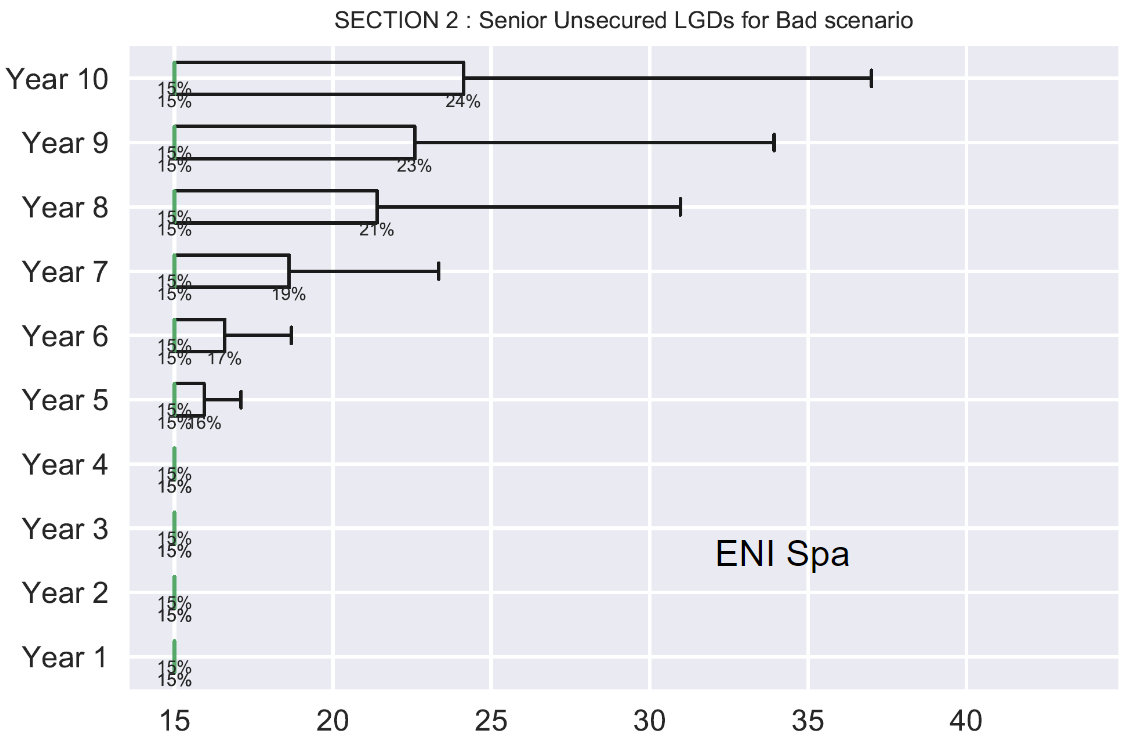 But, of course, ENI forward looking PD curve are a lot different and would push any RAROC or ECL computation higher than those of EXXON 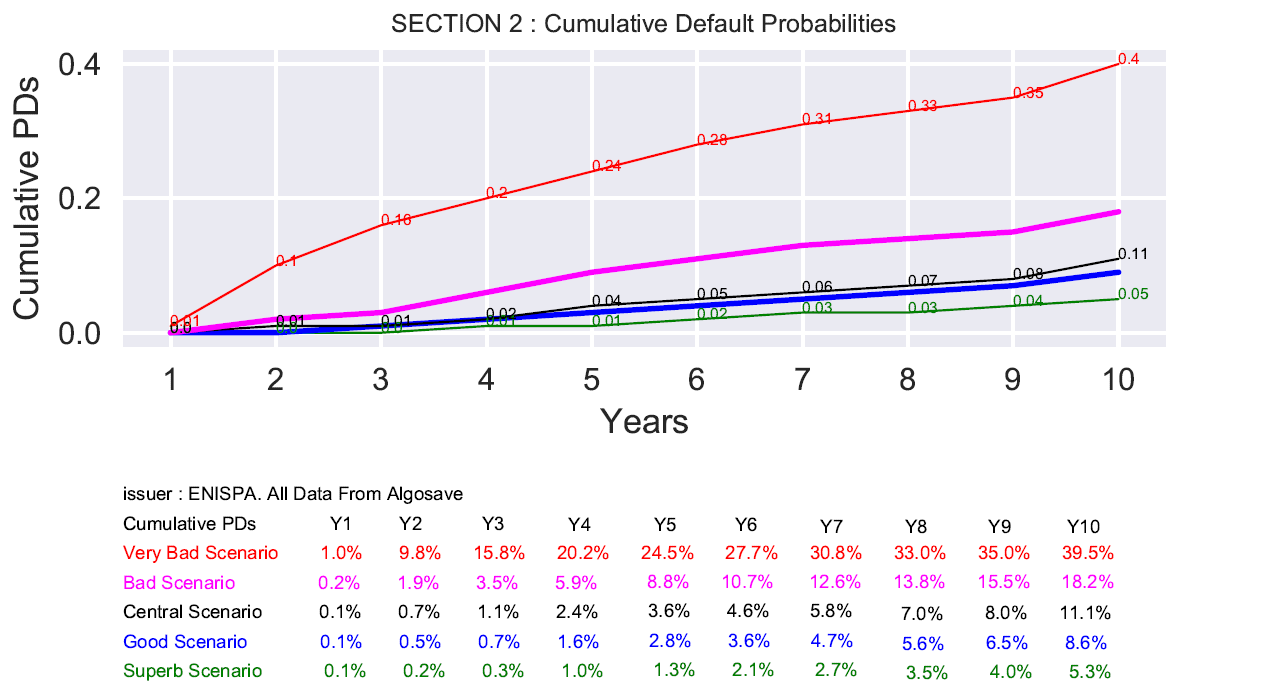 Now the answer for your vote ? The only corporate among those 7 majors which will always show rock-bottom-low 15% LGD in the here-above 3 credit exposure is : Husky Energy, the lowest credit rating of all.

So, 12 points for Husky Energy, and let’s all sing “O, Canada our home and native land…”

By the way, with such low LGDs, it is hardly surprising to see that Husky Energy IFRS9 12-month ECL is 22% lower than that of Total. Even with 3 notches difference in credit rating.

Having this information is real unfair competitive advantage, isn’t it ?