There is empirical evidence of high Default – Loss Given Default correlation. This historical phenomenon is also known as high PD-LGD correlation.
Indeed, historically and during periods where there is a relatively high number of corporate defaults, the average Loss Given Default – LGD – is also relatively high. And, the opposite is also true. During periods where there are relatively few default occurrence, LGDs are relatively low on those occurrences.

Does this empirical observation also hold true throughout the term structure of forward-looking and Point-in-Time PDs and LGDs ?

Contradicting this intuitive correlation, there are also cases whereby benign macro-economic LGDs are as high or even greater than stressed LGDs. This phenomenon mostly happens towards the end of the term structure.

We will illustrate this finding with a few examples that all come from ALGOSAVE CORPORATE ISSUER DATABASE.

For instance, in the case of BP PLC – the first histogram at the top – whereas the consensus 3-year unsecured LGD (in blue) are distributed between 40% and 63%, the stressed LGDs (in red) are distributed between 73% and 98%. As shown in the other 2 histograms, this marked difference between ALGOSAVE 2 LGD regimes (benign and stressed) also holds true both for the other 2 corporates at the 3-year point. Although there is already a little overlap for Occidental Petroleum.

This PD-LGD correlation almost holds true throughout the scenario-sensitive LGD term structure. Indeed, from 3-year to 10-year, the LGD of ALGOSAVE benign economic scenario – associated to lower PDs – are generally lower than those of ALGOSAVE stressed scenarios – associated with higher PDs.

However, those 2 LGDs regime sometime overlap. This is the case of BP PLC and Royal Dutch Shell 10-year LGD distributions, where the blue bars (benign scenario) overlap with the red bars (stressed scenario)

Validating empirical findings, ALGOSAVE confirms that PD and LGD are correlated throughout the term structure albeit with some overlap. 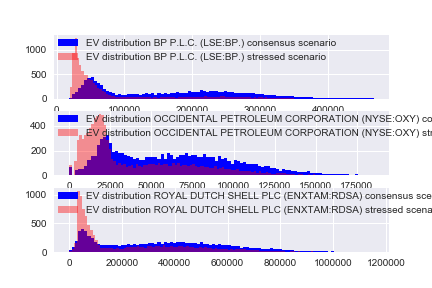